Earlier, Quetta Gladiators won the toss and elected to bowl first, where Hasan Ali, Ashgar and Wahab Riaz took 7 wickets between them, conceding only 42 runs in their 12 overs. A late onslaught by the West Indian insured that Zalmi got to a defendable total of 148 runs.

LIVE UPDATES
Peshawar Zalmi are the champions of the 2nd season of the PSL!

15.6: OUT! 18-year-old Hassaan Khan goes after making 4 runs. Riaz gets a wicket.End is getting nearer now. Will Sammy and Zalmi live up to their promise?Flashback:

14.4: OUT! Anwar Ali is out of sorts, hits the ball towards mid-wicket, mistimes it to the fielder on the off-side.

It would have been a piece of cake for quetta if they had their orignal squad.#CricketComesHome #PslFinalLahore

12.5: OUT! Asghar gets his 2nd wicket in as many balls. Stumped by the keeper, Nawaz walks back to pavilion.

12.4: OUT! Sean Ervine is bowled, excellent bowling by Ashgar.

11.4: FOUR! Ervine hits Jordan at fine-leg for a boundary.

Only 5 runs from the over, all singles. Anwar Ali unable to hit bowler Asghar for boundaries.

Slogans of ‘Go Nawaz Go’ being raised in the Stadium. Memes underway:

Cricket comes back to Pakistan. Tweep captures a beautiful view:

8.2: FOUR! Ervine plays the ball inside out towards extra cover region.

Excitement of the PSL has carried its way all the way to England, where Mayor of London has tweeted in support of #PSL

Really great to see the return of cricket being played in Pakistan. No losers today! #PslFinalLahore #PSL 🇵🇰 pic.twitter.com/3EUYGaNwPs

7.2: OUT! Saad Nasim is gone. Mistimes the ball magnificently.

Appropriate response by the tweep:

Wahab Riaz is introduced to the attack.

Neat over by Jordan. Asking rate is climbing towards 9 per over for the Gladiators.

Zalmi fans are over the moon. No pun intended.

5.4: OUT! Sarfaraz is stumped. Clever bowling by the professor, as he pitches it wide. Keeper collects the ball and dislodges the wicket.

Things looking gloomy for Quetta. Tweep’s got the tweet right:

5.2: FOUR! Sarfaraz sweeps the ball towards legside. Hafeez is on the receiving end.

4.5: FOUR! Sarfaraz Ahmed hits the ball outside off.

3.1: OUT! Anamul Haque tries to hits it to long-on, Jordan catches it.

Just 3 runs from the over.

Slow start from the Gladiators. Tweep expresses a valid point:

Tight line and length from Hasan Ali. Just 1 run from the over.

Ahmed Shahzad and Morne van Wyk make their way to the crease. Hasan Ali to bowl the new ball.

END OF ZALMI INNINGS. QUETTA NEEDS 149 TO WIN FROM 20 OVERS

Very expensive over by Anwar Ali. Sammy has put Zalmi right back into the game.

19.3: SIX! Another gigantic blow by the West Indian. Anwar looks hopeless in face of sudden onslaught.
19.2: SIX! Straight down the ground. Sammy has skied it straight into the bleachers.

18.4: FOUR! Hit towards cover region for a boundary.

PSL has found a fan in Indian legend Rishi Kapoor as well:

Anyone know which Channel PSL telecasting? Any wise cracks and you are blocked

Nawaz bowls another good over, finished his quota of 4 overs. He has conceded just 16 runs.

51 balls since the last six. This tweep has got this right:

16.4: OUT! Iftikhar Ahmed gets out LBW, bowler Emrit on hat-trick.

16.3: OUT! Hafeez skies the ball and mistimes it. Caught in the deep. He goes making 12 from 13 balls. Zalmi fans missing Afridi’s firepower in the middle overs.

Anwar tightening up the noose for Peshawar. 5 runs of the over, no boundary.

Action missing on the pitch as run-rate falls. Spectators however:

Kamran Akmal interviewed during the over. Here is what he had to say:

If we keep playing like this, we can make 160/170. Our bowling is capable to defend this target: @KamiAkmal23
– #CricketComesHome #QGvPZ pic.twitter.com/pspSxyiNGu

PSL final being watched by people all over the world:

11.4: OUT! Stumped by the keeper as the bowler sees the batsman coming down the pitch. Hasan Khan throws it wide, gets the wicket.

Muhammad Hafeez walks onto the crease. Peshawar Zalmis is going at 8.2 runs per over.

I’ve been an analyst of #Pakistan for 10 years. I can’t recall witnessing such pure euphoria & patriotism. A great scene! #PSLFinalLahore

9.6: OUT! Kamran Akmal is sent back to the crease. What an anti-climax to the over.

9.3: SIX! Samuels powers the ball over the fence, over off side.

Hasan Khan is bowling tight line and length here. 2 runs from the over.

Earlier, during the closing ceremony:

Samuel walks onto the crease.

4.4: OUT! Emrit bowl Malan. Right into the stumps. First breakthrough for the Gladiators. Malan drags a slower ball onto the stumps

The 2Ws will feature in the commentary box today.

Great to work with this guy again especially on an epic night like this#CricketComesHome @waqyounis99 do you think we’ve still got it? #2Ws pic.twitter.com/HKSgsVlP4d

The legend himself tweets:

“You don’t have to be at the match to hear the crowd roaring,everyone all over the world can hear it,we are all partof it. Its ours tonight”

Emrit has been hammered for 15 runs. Both boundaries coming off the bat of Kamran Akmal

Afridi receiving adoration from fans. Unlucky to miss out on the final due to injury:

13 runs off the over. Expensive from Zulfiqar. Kamran Akmal looking in-form yet again.

Over 0.0: Zulfiqar Babar takes the bowl. The left-arm-slow bowler will bowl the first over.

Beautiful placard by a fan: 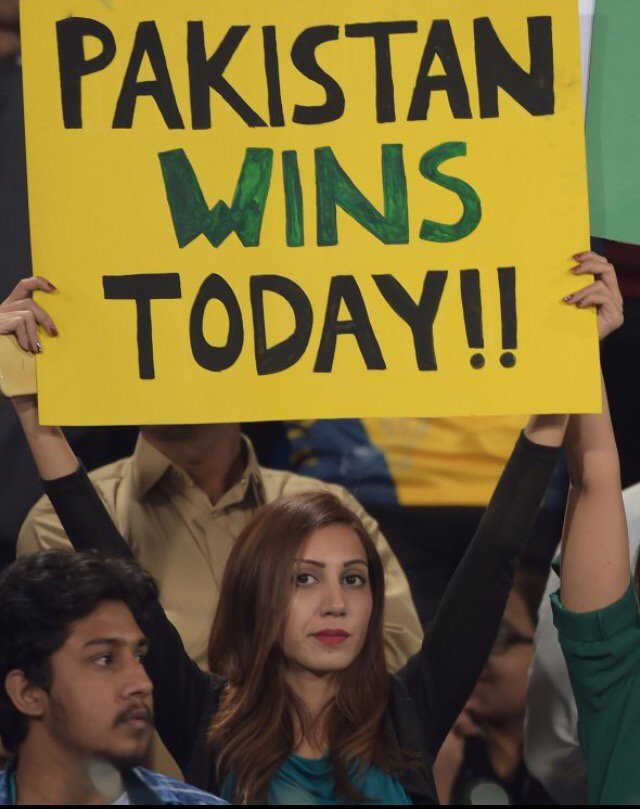 The match began at 08:00 PM. Following players will feature in the PSL final:

No images found!
Try some other hashtag or username